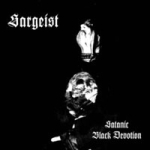 Originally started as a side-project of HORNA, BEHEXEN and PEST members SARGEIST’s debut album “Satanic Black Devotion” proves that this layer can easily grow its pestilent seed on its own. Soul bewitching darkness, abysmal emotions, despair, hatred, cold are words that enter my mind when I listen to this CD. Musically SARGEIST balance skillfully on the edge between storming aggression and rousing mid-tempo heaviness and vary the tempo within each song often enough to prevent the album from getting monotonous, the vocals are mostly high yet grim and intense screams, the production adds to the overall eerie and gloomy feeling of the CD. Songs like ‘Glorification’, ‘Panzergod’ (cool song title!!!), the memorable ‘Black Fucking Murder’ or the epic and folk-influenced ‘Sargeist’ tear you down in SARGEIST’s blackened empire and should satisfy any fan of the aforementioned bands as well as anyone out there who loves honest, unpolished Black Metal that does not copy DARKTHRONE once again. “Satanic Black Devotion” is a fascinating CD of individual sounding grim and hymnic Black Metal and highly recommended. Surf to www.moribundcult.com for an MP3 file and additional information about this promising act.