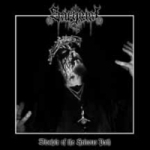 Classic Norwegian Black Metal made in Finland – that would be the easiest description of SARGEIST’s new release. Sure it is not the most original one in Black Metal, but it has all the trademarks of a good album from that genre: grim, primitive (but not monotonous), evil and cold with a dark yet clear production and a hateful vocalist – just as I like it. The music often varies between fast and atmopspheric parts and consequently keeps its old school feeling that it is a joy to listen to the six tracks. If you like (next to DARKTHRONE, old EMPEROR without keyboards and American Black Metal bands like XASTHUR), other Finnish bands like HORNA and BEHEXEN than this release will be worth the money. Speaking of the last two bands: SARGEIST started as a side project from members of HORNA and BEHEXEN but is taken as a full band these days. They released three demos under the new name, a split with MERRIMACK and one with HORNED ALMIGHTY, and a debut CD called “Satanic Black Devotion” (check out the review here as well). Dark stuff! I have listened to so many cool bands from the Black Metal underground during the last month that it is quite a joy that Black Metal again stepped out of the attention of the big media und crawled back to the dark and cold crypt of the underground: just where it belongs! Go out and check the following bands and you know what I am talking about: CRAFT (thanks for the tip, Frank!), XASTHUR, HORNA, BEHEXEN, URGEHAL, BLACK FUNERAL, FUNERAL PROCESSION and now SARGEIST! Viva la underground! Speaking of… no band website available! www.moribundcult.com