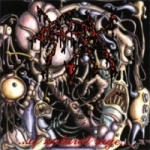 SARX is a German five piece that has been around for about three years now. It only took them one year to decide that they wanted to finance the recordings of their first full length CD on their own (whatever happened to the good old demo?!), so in May 2000 they already entered Little Mountain Studio in Meiswinkel (wherever the fuck that may be…) to produce “… Of Natural Rage…”. The eight song disk offers straight ahead brutal Death Metal with some melodic guitar work here and there and convincing deeply grunted vocals. The additional shrieky vocals that they use every now and then sound pretty ridiculous though and remind me on a third rate and rather inexperienced Black Metal vocalist. Certainly an aspect that needs big improvement. Furthermore the production (especially in the guitar department) suffers a little bit from the lack of brutality. A more massive or deeper tuned guitar sound could easily help to make them sound more intense. In combination with the deep vocals that would fit a lot better anyway. So, basically the band is already on the right way, it’s just those little bits and pieces they should continue to work on. Well, the coverart also suxx, but as it’s the music that matters you shouldn’t hesitate to keep their name in mind for the future. Contact and further (ordering) info: Christian Treude, Sommerstr. 26, 57339 Erndtebrueck – Birkelbach, Germany, e-mail: ch.treude@gmx.de, website: www.SARX.de