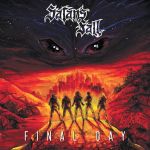 In April, SATAN’S FALL released “Past Of”, a compilation of their previous work, with which they want to draw a line under this creative phase, beginning with a demo, EP, single and compilation. Releasing a compilation album before your debut record! I have never encountered it before. Some detective work reveals that the compilation record consists of a collection of demos from the group’s past, so obviously the intention was to end a period with this and start with a clean slate. That clean slate is therefore called “Final Day”, their debut full length, which was now released in co-operation with revered High Roller Records. In terms of music, these men from the north of Europe, have also developed further: away from the speed oriented shredders, towards catchy melodies and riffs. Tempo is now brought to the fore more pointedly (‘There Will Be Blood’, ‘Juggernaut’, ‘Forever Blind’). Otherwise, precise guitar melodies (‘Madness (Finds A Way)’, ‘They Come Alive’) are in the foreground. With ‘Retribution’ or ‘The Flamekeeper’, it is sometimes throttled to mid-tempo. All songs were produced by SATAN’S FALL itself, and mixed and mastered by veteran producer Mika Jussila at Finnvox Studios. Singer Miika Kokko has a rather hoarse voice, but certainly impresses as a roaring buoy and leads the whole journey to their envisioned final day. The crunchy production, certainly helps to express the spirited combination of guitar, bass and drums sections. On each play, the atmosphere would hook exposed one instantly and led them to listen on repeat and keeping on throwing your fist up high to the Finns. The last song ‘Final Day’, a six-minute-long one in which everything is pulled out of the closet and shows their song crafting prowess. The group has clearly saved the best for last. With a retro-spective(!!) album cover art by Anu Bring, in less than 40 minutes, the Finns poured their self and certainly can be regarded as one of the most auspicious and stimulating traditional Metal releases 2020! In their current line-up, SATAN’S FALL now have their own fingerprint despite their conservative orientation and will assert themselves at the forefront of the scene in the long term, if they remain in this path. Explore more about the band and label here: www.facebook.com/satansfall, www.hrrecords.de.