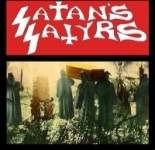 Since DARKTHRONE have taken it upon themselves to function as an underground zine rather than a band, I hope they get wind of this tape and put the logo on their next album cover with their mascot, Mr. Necro. If only DARKTHRONE could write heavy garage Punk / Metal like this. SATAN’S SATYRS live in Virginia, formed in 2009, and are doing all the other American states proud with their drunken anthems barely a year later. The demo as a whole is as interactive a tape as one could hope for. The cover sports hooded figures carrying a casket, the liner notes are done in classic horror fashion, and the tape is a bright red with black lettering. Yet there is a danger to a product like this. Too many bands present their bands like patched jackets. They pick and choose from every Metal genre, and think that alone makes them good because they’re "old school". But that isn’t the case here. This demo exudes authenticity as well as conjures fond memories. Each track was recorded in a different month during 2009. The last track, ‘Satan’s Satyrs’ was cut in August. The first, ‘Lycancycler Cult’, in November; and the second, ‘The Dread Persists’, in early December. To have written such good songs in five months is quite a feat. The band has announced that Skeleton Plague Records will receive copies to sell in the United States, and Devils Poison Produktionen will handle sales in Chile and the greater part of South America. To reach the band personally, write to: satanssatyrs@gmail.com