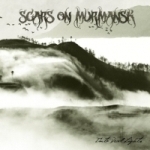 French Death Metal à la SCARS ON MURMANSK (great band name, btw). How about that? SCARS ON MURMANSK have released just one digital EP "Travelling Through Dark Places" in 2011, which was available for free download since March 1st, 2011. The reviews for it were kinda overwhelming – and soon the French label Great Dane Records acknowledged their potential, and signed the band. As a result of this, a 10-song recording was done, carrying the title "Into Dead Lights". SCARS ON MURMANSK have chosen to perform their Death Metal diverse, brutal and modern sounding that really goes under one’s skin. These four French blokes have found a nice harmony between more melodic arrangements and brutal sections within their songs. I really like what I am hearing. Keeping it diverse is also one of those key factors that makes "Into Dead Light" such a good ride; the guys have actually put quite a lot of thoughts and sweaty rehearsal sessions into making the songs to stand out as well as they do on their debut full-length. Fans of DEEDS OF FLESH, CANNIBAL CORPSE, AVULSED and the likes of who care for teeny-weeny experimental, brutal and well crafted Death Metal, here might be something for your likings. www.myspace.com/scarsonmurmansk, www.facebook.com/scarsonmurmansk