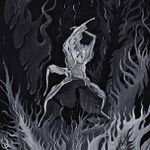 This is the debut album of a young band from Germany. All of their members have previous experience with other bands, although none of those bands were in the style they are doing now, but one can hear the roots. SCHAFOTT plays a very energetic kind of Thrash Metal with many Black Metal touches, yet one can hear many Speed Metal and old school Death Metal touches. But whereas most people will think of Black / Thrash as something done by VENOM, BATHORY or early SODOM and some raw Rock’n’Roll in the MOTÖRHEAD tradition, SCHAFOTT sounds darker, meaner and more aggressive, probably because of their Death Metal influences and violent Thrash Metal à la DARK ANGEL and HOLY TERROR. Yes, they do take quite a lot of influences from many bands, but they add that to their killer form of Metal. In some ways I can relate them to the early works of another great German band KETZER and sometimes to the sound of TRIBULATION from their “Formulas Of Death” album. They also have a sound that reminded me of a more thrashy version of early MORBID ANGEL. Not only this debut album is very good and brings back sounds of killer Speed / Thrash / Death / Black Metal, they do it with such ease that it is quite hypnotic. One minute they sound like AUTOPSY, then break with a riff that sounds like Speed Metal era HELLOWEEN and then have a “Bonded By Blood” ending… quite impressive. This is the case where they do take obvious influences and make them their own without sounding forced or like stealing riffs. They do it the right way. It also shows a very promising future. Released by High Roller Records, I just can tell you to get both the CD and the vinyl version (with extended artwork!) as soon as you can say fire! Still some months to go and we have a contender for best release of 2017! www.facebook.com/pages/schafott/317115871723020, www.hrrecords.de