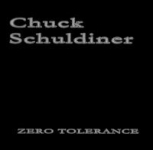 This album features a four instrumental rehearsal of songs that were supposed to be on CONTROL DENIED’s second album and DEATH’s "Infernal Death" / "Mutilation" demos. While the first CONTROL DENIED record never really convinced me completely having viewed it more or less as a DEATH album without the same class, the bulk of material for its never completed successor doesn’t either. Chuck’s supposedly said when he was working on this new record that he wanted it to be an instant classic release in the league of "Painkiller", "Master Of Boredom" (ooops "Puppets"!) but too many long drawn out / cheesy riffs found their way throughout those four songs. This said, it’s Charlie who was the mastermind behind this and at times the geniuses / killer / catchy lines that come from nowhere and grab you by the balls right away are also here but in minority this time just like one in the second tune (the songs are untitled) or on the third one during a fast part (and saves it from sucking completely) so it’s really average as a whole. Also again most of that stuff could have easily appeared on a DEATH album as there never been such a difference between the two bands musicwise. Then the two demos come in their complete form but it’s a real shame that those recordings didn’t came directly from Chuck’s collection of recordings because what has been used here comes from a fourth generation tape at least. It really sucks considering that this material especially the "Infernal Death" demo showcased DEATH at their best in my opinion (with a line up featuring Kam Lee drums / vocals, Chuck guitar / vocals and Rick Rozz guitar), ‘Infernal Death’, ‘Baptized In Blood’ and ‘Archangel’ are just perfect examples of brutal Death Metal at its prime where everything sounded natural and not forced, massive killing riff after massive killing riff that simply leaves you either breathless or breaknecked (or both in certain occasions) after such an assault of perfection. If you’re a long time DEATH follower like I am, get this as it’s always good to hear material from the man. I won’t comment on the disputes that surround this release, let’s just say that I’m quite happy that Guido from Karmaggedon did it, no matter what some might think.