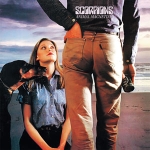 Somehow "Animal Magnetism" suffered from the fact that its predecessor and follow-up albums "Lovedrive" (1979) and "Blackout" (1982) have been so important in the history of the SCORPIONS. The band was still touring quite massively in support of "Lovedrive" when their record company already asked them for a follow-up album, so the material on "Animal Magnetism" mainly had to be written on the road under a lot of pressure. But I never really considered the album weak or rushed because of that since it features a lot of extremely cool tracks that definitely stood the test of time. Unlike many other SCORPIONS albums this one only comes up with one single ballad (‘Lady Starlight’), while the other eight album cuts are straight ahead hardrockin’ stuff. And the two rather dark sounding ‘The Zoo’ and ‘Animal Magnetism’, which seemed pretty unusual in the first place for a band like the SCORPIONS, became real classics over the years and have even been covered by a.o. BRUCE DICKINSON and ARCH ENEMY (‘The Zoo’) or TESTAMENT (‘Animal Magnetism’). I really like the album because it offers a lot of very unique ideas that creatively easily recalls the Uli Jon Roth era of the band (just check out some of the partly unusual guitar work on here). Don’t really understand why the album cover once again created a controversy at the time (the same happened with the "Virgin Killer" and "Lovedrive" sleeves already), since from today’s point of view it looks kind of ordinary… Times definitely have changed. Just like all the other deluxe re-releases also "Animal Magnetism" was remastered and comes in a big digipak with a booklet full of old pictures, additional info and lyrics. Even though there’s no bonus disc or DVD included in this one, you still get six additional tracks. ‘Hey You’ (featuring Rudolf Schenker on lead vocals) was already recorded during the "Lovedrive" sessions and released as a single in 1980, before "Animal Magnetism" came out. The song has already been used as a bonus track on some previous CD editions and can also be found on the "Best Of Rockers’n’Ballads" compilation CD from 1989 in a longer version. The other five bonus tracks are demo recordings from back then: ‘Animal Magnetism’ (totally different from the song that ended up on the album), ‘American Girls’, ‘Get Your Love’ (demo version of the song ‘Heroes Don’t Cry’, which re-surfaced in the 90s), ‘Restless Man’ (which was changed into ‘Twentieth Century Man’ on the "Animal Magnetism" album) and ‘All Night Long’. All of them are not really essential, yet a nice addition to this fine re-release. For all additional information check out www.the-scorpions.com or www.facebook.com/scorpions