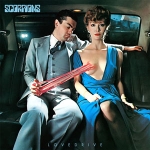 While classic bands such as IRON MAIDEN, JUDAS PRIEST, AC/DC, KISS, SAXON or MOTÖRHEAD are all still relevant for their old school fans around the world after all those years, the SCORPIONS definitely lost a lot of ground in the Hardrock and Metal community as soon as they started to write all those wellknown and often rather cheesy, radio friendly tunes. That’s also part of the reason why they disappeared from my personal radar right after the "Blackout" album from 1982. They simply tried too hard to fully establish the band on the American market for my taste. But when you grow older you also become more open minded again, so I’ve started to re-visit some of the band’s early albums recently that got re-released in rather impressive 50th Anniversary deluxe editions. "Lovedrive" (from 1979) is still one of my favorites from the classic SCORPIONS era, because it pretty much marked the beginning of the band’s trademark style and sound. Jimi Hendrix fan Uli Jon Roth (who was responsible for some amazing guitarwork on their early albums) had just left the band, so "Lovedrive" marks the debut of newly recruited former LADY / FARGO guitarist Matthias Jabs, who already did an amazing job. His playing was pretty different to Roth’s and more along the lines of Rudolf Schenker, so he fitted in just perfectly. The icing on the cake gets delivered by Rudolf Schenker’s brother Michael though, who plays additional leads on ‘Another Piece Of Meat’, ‘Coast To Coast’ and the titletrack ‘Lovedrive’. How cool the band’s career might have become creatively, if they would have continued with three guitar players (just like IRON MAIDEN is doing these days), unfortunately is just fanboy dreaming. The reason why I still love "Lovedrive" so much probably is its musical diversity. You get pretty aggressive and speedy stuff such as ‘Another Piece Of Meat’ or ‘Can’t Get Enough’ (you gotta remember that this was way before Speed Metal even existed!), great rockers like ‘Loving You Sunday Morning’, ‘Lovedrive’ or the groovy ‘Is There Anybody There?’, the cool ‘Coast To Coast’ (which originally wasn’t even planned to become an instrumental) and of course the two (semi) ballads ‘Always Somewhere’ and ‘Holiday’. I never really understood why the band is always associated with ‘Wind Of Change’ nowadays, because to me they wrote way better ballads throughout their career for sure (those on "Lovedrive" are just two fine examples). This deluxe edition was totally remastered and also features two bonus demo tracks: the previously unreleased rocker ‘Cause I Love You’ and an extended (3 minutes longer) version of ‘Holiday’. Both definitely not essential, unless you’re a die hard fan of the band. Way better is the also included free DVD which features a SCORPIONS live show from 1979, originally shot for Japanese TV, but also broadcasted in Germany (the version included here is the one from Germany). The setlist includes a couple of "Lovedrive" songs, combined with older songs like ‘We’ll Burn The Sky’, ‘Life’s Like A River’ or ‘Fly To The Rainbow’ and showcases how hungry and full of energy the band still was at the time. Some brandnew interviews (in quite entertaining English) with Klaus Meine, Rudolf Schenker, Matthias Jabs and Herman Rarebell complete the DVD and reveal a lot of interesting details about the origin of the album. The whole package comes in a nice digipak and the booklet features lots of old pictures, all lyrics and additional information. So, if you still like some good old SCORPIONS every once in a while, this Anniversary edition of "Lovedrive" is highly recommended! More info at: www.the-scorpions.com, www.facebook.com/scorpions