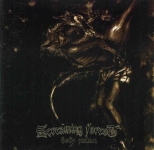 Ukrainian Black / Death Metal act SCREAMING FOREST is probably a pretty known entity for many but the fact is that within just 4 years, they have released 4 studio albums, off which "Holy Satan" is their 3rd one, released in 2011 on Russian More Hate Productions – just like all of their other 3 albums. Musically SCREAMING FOREST blend pretty nicely elements from both Black and Death Metal into their own thing, not really breaking any new grounds there much at all but still doing their thing kinda convincingly anyway. The vocalist and guitarist Holocaust actually sounds quite a bit like Kam Lee of MASSACRE on the "From Beyond" album, with his deep grunts – supporting the band’s aggressive pitch-black manifest about desecrating the son of God the best they possibly can, on an artistic musical level at least. What is also great about this release, it’s filled up with some good, chilling atmospheres, giving certainly a lot of depth to the songs to stand out better, considering SCREAMING FOREST consists of just 3 members (there’s no extra keyboard player or 2nd guitarist in the band). The guys have indeed paid quite much attention to get their songs to stand out the way as they do on "Holy Satan", making me also curious about SCREAMING FOREST’s entire catalog of releases. They did manage to convince me well enough with this release for placing them on this ‘bands to keep eyes on’ list for good. Maybe you also want to give a fair try for SCREAMING FOREST next? SCREAMING FOREST: www.facebook.com/screamingforest, label: www.morehate.com