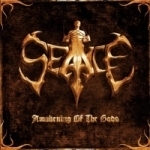 If I would compare this release with a football match (and I know that Frank will love this metaphor) the end result would be – thinking in favor of the home team – a close draw. All Swedish Death Metal fanatics may still remember the first SEANCE life / era (1990-1993) when the band released 2 albums via Black Mark. The members played / founded since then such well known acts like SATANIC SLAUGHTER and WITCHERY but after 15 years the decision was clear to resurrect their first creature SEANCE. The band is still celebrating the Swedish Death Metal way of life, but not as traditional as for example their big brothers EVOCATION. Their music seems a little bit more controlled by their minds than by their hearts. This means that they are playing on a very high level with a little touch of technical superiority and additional Thrash / Speed Metal influences can be found in nearly every song – a circumstance that is bringing them in connection with bands like DIMENSION ZERO. "Awakening Of The Gods" is for sure not a disappointing release but coming back to the football topic it’s not a game full of highlights. Some songs for sure have the potential to become classics, especially the extreme songs are absolute killer tracks (‘Invocation’, ‘Murder’) but this quality level isn’t applicable for the whole album. Not all songs can convince for 100% and with such a limited playing time it’s hard to accept the small amount of average 3 minutes standard songs. Nevertheless an interesting album and I cross fingers that we don’t have to wait further 15 years for release number four! www.pulverised.net