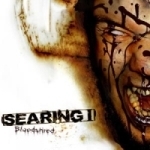 Since their formation in 1999 Sweden’s SEARING I have recorded four demos so far, and now they have released their debut album “Bloodshred”. It contains 14 songs of modern Death / Thrash Metal, with an intense combination of aggression and melody. The band makes sure to offer a good variety of speed within the songs and spice them up with melodic guitar leads and harmonies between the crushing riffs. The aggressive lead and backing vocals go with the music perfectly, every now and then they even bring in some rough harmonies, too. I can’t find any flaccidities on this strong album, the production is massive and the songwriting is excellent, so I can recommend it to all fans of modern Scandinavian Death / Thrash Metal. Receive first impressions by two songs from their demos on www.searingi.com. Labelpage: www.black-lotus-recs.com.