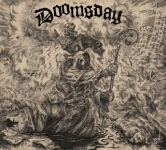 Russian Black Metal band formed in 2006, releasing their second album, and does this sound of greatness. The overall production is simply fantastic and adept to the style without being too polished as sounding plastic. The use of their native language adds that exotic touch only eastern European bands can achieve this way. Now for the music, SECT sounds a lot to some of those orthodox Black Metal bands, meaning you can sense something similar top ONDSKAPDT, DEATHSPELL OMEGA and small thing of WATAIN. But, the band is precise to play in their own game and thus, gives the style an interpretation of their own, something few bands are able to come up in such style. This, I must remind, consist of elaborated guitar passages, many tempo changes, and use of dissonant riffs here and there, upon a subtle evil melody all around. The vocals are also quite in the style, which in these cases can be describe as Death / Black style, with a preachy delivery of vocals. With a band like this, CULT OF FIRE, TEITANFYRE and PSEUDOGOD those places over there are truly invaded by an ancient evil. Beware! www.deathkvlt.com, www.nuklearapokalypse.com