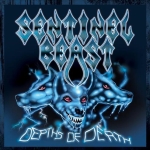 SENTINEL BEAST is a band of one album. Literally, as they were active between 1984 and 1987, and left only one album titled "Depths Of Death", which originally came out in 1986 on Metal Blade Records. They kind of reunited a few years ago, and except playing several shows, managed to release the "Up From The Ashes" compilation in 2010, which includes all their demo tracks from the ’80s. Within the years "Depths Of Death" earned cult status, and while many old albums which are labeled as cult ones these days, actually weren’t that good, this one here deserves all the praise, and maybe even more. These eight tracks represent what real Metal is all about: tough, straight, aggressive, and in your face. Full of venomous solos and powerful riffs. They weren’t taking prisoners, and the energy of this album is absolutely great – that’s why they are often labeled as a Thrash Metal or US Power Metal act. Not to forget the killer vocals of Debbie Gunn. Like many of the early Metal Blade albums this is a classic of the genre, and an album that should be present in collection of every serious old school metalhead. For the record: this new CD reissue from Marquee Records includes one bonus track: ‘Sentinel Steel’, taken from the "Metal Massacre VII" compilation. More information: www.facebook.com/pages/sentinel-beast-offical/103659469696612 and www.marqueerecords.eu