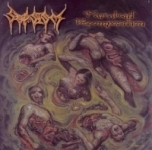 Due to Spanish Repulse Records bankrupt some time ago the Californian brutal old school Death Metal outfit SEPSISM’s first album turned into a sought after gem of late 90s Death Metal and I can tell you from my own experience that this CD was not easy to find at all (as it is with a lot of Repulse / Drowned releases). Since I only could call a burned copy of “Purulent Decomposition” my own at least I think it is a pretty good idea to make this album available again. It is excellently produced and still easily meets today’s sound standards, the songs are straight, driving and as brutal as CANNIBAL CORPSE on “Butchered At Birth” or “Tomb Of The Mutilated” and by adding a couple of Grind influences SEPSISM make sure that their music has at least a little bit of an own identity. SEPSISM’s debut is not an album that brought something new or influenced numerous bands, but it was released at a time when Death metal was quite unpopular and mainly underground bands came up with satisfying releases. “Purulent Decomposition” is in my opinion not an album that deserves to be called classic, but it is a timeless brutalizing CD that will shred your speakers every time you are in need of a more than solid dose of Death “Fucking” Metal! If you like to check out SEPSISM visit their well done website at www.sepsism.net or their label via the Displeased Records website www.displeasedrecords.nl.