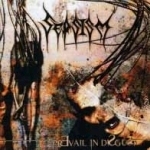 SEPSISM
To Prevail With Disgust
(From Beyond Productions / Displeased Records)
35:14min

I really anticipated the second full-length CD of Californian brutal Death outfit SEPSISM. Their ’99 debut album "Purulent Decomposition" released by the recently deceased cult-label Repulse Records was a well produced mix of old CANNIBAL CORPSE and TERRORIZER that easily created a strong appetite for more straight bloodthirsty Death Metal! Unfortunately it took SEPSISM four years to come up with a new album and I think many people who were impressed by the astounding debut simply forgot about the band. Now suddenly "To Prevail With Disgust" is unleashed upon the Death Metal scene and it sadly turns out to be a little bit disappointing. Although there are no significant stylistic differences compared to the debut and the old school feeling is still there, "To Prevail With Disgust" is obviously weaker in terms of production and songwriting. Less killing riffs, less entertaining songs, a mushy sound and a weaker cover artwork ("Purulent…" had a great Petagno drawing, "To Prevail…" features mediocre computer art) leave behind a sour taste. I expected a killer record after such a promising debut and such a long time of wait, but "To Prevail With Disgust" is just an average Death Metal CD and there are many bands out there, who are capable of creating just good Death Metal. In my opinion SEPSISM’s only way to survive is to put out a new more convincing album as soon as possible and commit to excessive touring or the band will sooner or later vanish in the realms of the Death Metal underground and be forgotten. For more information on SEPSISM check out their really great website: www.sepsism.net