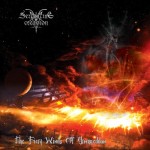 Back in 2009 I was able to get ahold of a few copies of a new band from Bulgaria. I was blown away by the quality of that release. "Dystopia" was the name of that album, and it showed a wicked, melodic and at ties epic kind of Black Metal with many Death Metal elements. The overall result was outstanding. One of those lost jewels of killer Black Metal of Death. Well, this is their second album and what was quite impressive with their debut is still here. The musical execution and production values are of high quality, but also the music creation is again killer. To compare the band I will say that it has bits of BEHEMOTH (in the days they were becoming more Death than Black) with a good touch of NECROPHOBIC and DISSECTION, and touches of early MAYHEM and EMPEROR. But just take that as an indication of the style. Each composition shows a lot of creativity, and the band is smart enough to play in many tempos, playing fast or in a slower, semi Doom approach, they never quit that sense of danger and darkness in their music. For a second album, this is some of the best Black / Death Metal with a melodic edge that one can get. Killer riffs and killer execution. And get their first album too! www.facebook.com/pages/serpentine-creation/363191940418604, http://serpentinecreation.bandcamp.com, www.satanath.com