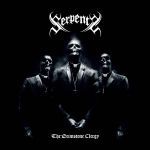 The Swedish SERPENTS are a quite new band, that up to now released a self-titled independent digital EP two years ago that also got around to a vinyl and a tape release. I haven’t heard that EP yet, but it convinced the well renowned label War Anthem Records to take the new band under their wings. The first result of this collaboration is another EP with six new songs, entitled “The Brimstone Clergy”. And these six songs show damn well that the three piece from Örebro learned the lessons their country mates taught. Especially MARDUK came to mind when I listened to the first two hate soaked riff massacres ‘Worship The Reprobate’ (that starts off with some chimes and acoustic guitars) and ‘End The Slavery Of Being’. With ‘Bring The Apocalypse’, SERPENTS have a more mid paced, yet not tamed song to offer, while ‘Shattered Paradise’ is a rather melodic song that reminds of a hateful version of AT THE GATES. The short acoustic instrumental ‘Interlude In B Minor’ opens up for the final ‘Requiem’, a solemn, nearly epic dark tune based on harmonic, very intense guitar work and a doomy beat. In my eyes, this one is the highlight of “The Brimstone Clergy”. But as good as this EP is (yes, it is!), I can’t help the feeling that I heard all of this before from bands that are around for decades. Thus SERPENTS maybe are not the most original new band around, but they show their potential here already. And I won’t be surprised if they come up with a damn fine full length album in the near future. Until that day, I can fully recommend “The Brimstone Clergy” to everyone who really digs the Swedish way of Black Metal. For more info and some musical impressions, check https://serpents1.bandcamp.com and www.facebook.com/waranthemrecords