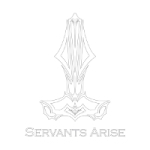 A great battle fought somewhere up in the hidden and secret northern lands; servants raising against their rules. Blood is shed, thousands people are killed – enter the dark realm of Ragnarök; the end of the world is here. This is the concept that has been tied up tightly on Finnish Black Metallers’ SERVED DEAD’s 10-track debut studio album, titled "Servants Arise". The music herein is a modern sounding, relatively technical and even atmospheric Black Metal – done with very modern, polished production values, yet hinting more towards DIMMU BORGIR’s or DARK FUNERAL’s directions – than let’s say, early MAYHEM’s or DARKTHRONE’s directions. In a way, there’s lots of good and even dexterous elements incorporated into the songs on "Servants Arise" but then again, they aren’t really doing anything that out of ordinary that would not have been done earlier – and better, by some other bands (don’t feel like throwing any names up in the air this time though). However, let me say this that I do like their album to a certain extent, especially when SERVED DEAD switches a more atmospheric mode on, and leaves this ‘running-on-the back-of-whirlwind’ effect more behind their wildly raging playground. Having said that – and realizing at the same time how much there’s actually stuff like this around these days, this rude fact will unfortunately make SERVED DEAD to struggle for every centimeter in this hardened world of getting-seen-and-heard, no doubts. Despite these Finns’ obvious talent to win some ground for themselves – straight under the feet of the most ridiculously selling and successful ‘Black Metal’ band ever, DIMMU BORGIR, it’s very unlikely that SERVED DEAD will ever hit the same league with DIMMUs in popularity – or even with DARK FUNERAL. "Servants Arise" undoubtedly has its a few precious, nice moments – yes, but sometimes that’s just not enough. Not this time though – that’s for sure. More at: www.myspace.com/serveddead, www.inverse.fi