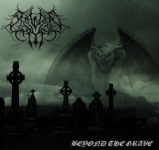 SHADOWS IN THE CRYPT
Beyond The Grave
(self-financed)
43:06min

Debut album, from this two piece Black Metal band from the USA. First thing that somehow is not exactly my thing is the use of a drum machine / computer / whatever that makes the band to have a “mechanized” sound if you know what I mean. But even with that, the result is quite interesting. First of all the guitar riffs and creation is way above average, and the solos shows an advanced guitar playing very few Black Metal bands dare to do (or are capable of). The vocals are maybe a weak point here as they sound too much like your average Black Metal high pitched screamer and show no variation at all. That, along with the sometimes irritating drum sound for cymbals, and the “mechanical” sound that it gives the band, takes away some of the power hidden within. I am sure, that if the band is able to change these details, they will grow into greater heights, as the fantastic guitar work and ideas are there. It reminded me a bit to that good project from TESTAMENT’s guitar player Eric Peterson named DRAGONLORD, which was influenced by BATHORY, IMMORTAL early DIMMU BORGIR, that one way or another can also be used as influences and references here, although in a much rawer form. Still and interesting debut album that promises greater shadows to haunt us in the future. www.facebook.com/pages/shadows-in-the-crypt/127818950623205