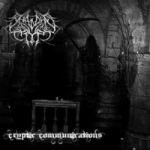 Second full length album, of this American Black Metal band, that now show a full line-up. Does it really matter from where the music comes from? No. Breaking that chain works a lot in terms of appreciating the music. SHADOWS IN THE CRYPT plays here a very interesting form of Black Metal not far away form what they played on their debut album, but way more mature and interesting. Sure, there must be some Norwegian and Swedish influence, as there is a grim tone on the guitar sound, but what shine is the excellent execution, and the quite some variety in the influences found here. I can sense some GEHENNA, some ARCTURUS of course some early MAYHEM and to add more to the mix there is also a good dose that relates to bands like ABSU, I can also sense a touch of INQUISITION and with a big touch of KING DIAMOND, especially in the great guitar solo section. A special mention must go to the drumming that sounds very good, and plays in a quite very effective way. Vocals (done by a different vocalist than the debut album) sounds at times like those of Dolgar from GEHENNA and maybe the use of more variety will just doe a lot more for them, something the band shows can do with great results as can be heard in ‘Revolutionary Genocidal Madness’. But then again, it would be a really minor complain. As it is, without doubt this is one of the best Black Metal bands no matter from what country the come. Great album and one more in my “want list” Total support. www.facebook.com/pages/shadows-in-the-crypt/127818950623205, www.hpgd.comoj.com