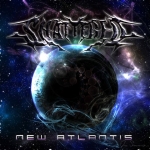 If a band is describing its style as technical and even got shirts printed with the slogan "Technical Death Metal" all sirens are quivering. Or at least my personal antennae, because much too often the term technical is used to disguise the lack of abilities regarding songwriting. One does not simply play a guitar, bass or drum solo as an end in itself. It needs to make some sense within the structure of the song. But when it comes to "New Atlantis", the debut by SHATTERED from Würzburg, Germany, there is no need to fear narcissistic and self-loving musicians. Besides the two instrumentals ‘Trapped In Everlasting Dreams’ and ‘As Atlas Reached The Stars’ the band performs 12 songs within 45 minutes, so every track has a running time short of four minutes. Which means SHATTERED are playing at a scorching pace with a very clear and forceful sound, once again making me speculate about the self-financed aspect. Did one of the five guys won on the lottery or are recording devices and equipment available at low cost? Well, I guess the latter one. Or maybe my demands about a good sound are pretty moderate. Besides the technical aspect SHATTERED are convincing the listener with a huge amount of melodies, chasing each other the whole time. No keyboards, female vocals, movie samples or suchlike, the band knows to impress by their musical skills. Nope, no name dropping this time. But for the first moment I was convinced this band must be of Swedish origin, so I guess some names may already pop up in your head. Out of nowhere (the band was formed in 2013) one of the best melodic Death Metal outputs that I came across during the last months. www.facebook.com/shattereddeath, www.reverbnation.com/shattered4