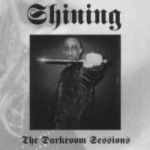 I can’t really tell you whether this is really an official release (as it is promoted by Perverted Taste) or just a bootleg (as “rumors” say), nor do I care… Fact is, “The Darkroom Sessions” is definitely NOT essential for all those of you who weren’t familiar with the material of SHINING yet. So, for the ordinary Metalhead this is equally “important” as the band’s other recently released collection “Through Years Of Oppression”, yeah maybe even less than that as there’s no real unreleased song on offer here this time. “The Darkroom Sessions” comes up with six songs of this Swedish horde (it’s still a full length album as all of them are pretty long in their individual playing time)… Four from their “Shining III: Angst, Självdestruktivitetens Emissarie” release and two from “Shining II: Livets Ändhallplats”. Except for the last track (‘Ännu Ett Steg Närmare Total Utfrystning’), all of them are featured in instrumental (pre-production?) versions on here, which is not as uninteresting as it may sound in the first place. It’s actually more of a proof of how good SHINING are in creating their dark and sinister atmosphere without using any “outside” instruments – apart from guitars, bass and drums. They easily capture the attention of the listener through a very grim feeling and a bunch of great (morbid) melodylines, so that you never really miss the vocals. I even dare to say that most of these songs could easily have been released as instrumentals on their regular albums as well. The sound quality is better than I expected it to be (it’s actually pretty good, yet very Black Metal typical), considering the note on the disc that these are “outakes and rehearsals”… I don’t really get the fetish type pictures used for the design of the CD though, as they never have something to do with SHINING’s suicidal concept nor with Black Metal in general. So, to sum it up: basically a rather superfluous release, unlike you are a Black Metal addicted or SHINING diehard! In this case, it’s a pretty interesting, unusual one… Label contact: www.pervertedtaste.de