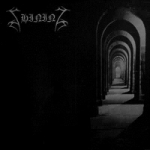 Yeah, I know that we’re pretty late with a feature on these guys, but right around the time, when I first got to hear a song from SHINING’s latest album “Shining III – Angst” (which quickly resulted in the fact that I wanted to hear more), Laurent of Belgium’s Painkiller Records included a promo copy of the band’s debut album “Within Deep Dark Chambers” in a package he had mailed over to me (thanx mate!). Of course I can’t tell you if SHINING still sound exactly like this today (as two more full length albums have already been released ever since), but that doesn’t mean that we should ignore this album here. Its quality is undeniable and therefore still deserves your attention! “Within Deep Dark Chambers” came out back in 2000 and only features six songs, but each of rather long individual playing time (approximately between seven and eleven minutes). Musically SHINING pick up the pieces of the totally commercialized Norwegian Black Metal underground and carry on with its basic elements, but not without adding their own unique note to it. Cold, mean, aggressive, suicidal, depressive, melancholic, destructive are words that come to my mind when I listen to this early material. Even though the band is located in Sweden, their overall musical style still has a very “Norwegian” touch to it (especially in the faster parts), yet they’re always remaining original in the songwriting department. The vocals are mainly of the shrieky, hysterical type and come across in a rather tortured sounding manner, which fits SHINING’s raw material pretty good. So, all in all this is definitely a very promising debut, recommended to all worshippers of the raw Scandinavian Black Metal movement. And instead of feeding my personal hunger for more SHINING material, it ended up making me even more curious about the stuff which was about to follow.