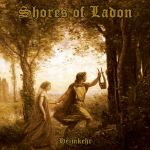 The worldwide Black Metal scene is a really bottomless pit it seems. For me as someone who’s not only into Black Metal it is always a surprise to detect bands I never heard of but that are around for a longer time and already have quite a lot of stuff out. Another good example are SHORES OF LADON from Mecklenburg-Hither Pomerania in Germany. This band started in 2009 and already have released an album and a bunch of demos and EPs. After a new promotional demo and a split release last year, SHORES OF LADON just put out two new releases. Asides from their second full length “Witterung”, we have this EP called “Heimkehr” with five more new and a little shorter songs. Listening to the songs I quickly got the feeling that I missed out on something not knowing SHORES OF LADON before, as their mainly pretty old fashioned Black Metal really hits my nerve. Especially the guitar sound and tone really reminded me of the very fine first album from THE ABYSS, who had a similar feeling in their music. Yet SHORES OF LADON know how to slow down every once in a while when it is needed like in the title track. And with the fantastic ‘Jagdgrund’ they even touch epic atmospheres. The very typical shrieking Black Metal vocals are fitting very well here and round off a damn fine first contact with SHORES OF LADON. Guess I need to catch up with their older releases, as well as their new album soon. If you’re into really good Black Metal, check https://shoresofladon.bandcamp.com and www.solrecords.de