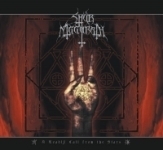 Does anybody still remember such releases as “Evilness & Darkness Prevails” (1993) or a little Mexican Black / Death masterpiece titled “The Kinglike Celebration” (1997)? If your answer is yes then you might rejoice as these devoted disciples of the Cthulhu cult have returned with a new album continuing entirely in the tradition of old. Lyrically this obviously means invocations and odes to the ancient ones which are musically supported by an aggressive yet also highly atmospheric sound due to skillfully placed synths and effects by THE CHASM’s Daniel Corchado (also owner of Lux Inframundis). SHUB NIGGURATH are renowned as being among the forefathers of an obscure Mexican Black / Death sound that draws upon influences from bands like SARCOFAGO, SAMAEL, earliest MORBID ANGEL, OBSCURITY and BATHORY to equal parts and results in a bewitchingly unique and captivating vibe. Anno 2011, that has not changed – not a bit actually! Remaining original member Julio Viterbo performs quite well in terms of finding the appropriate riffs and song structures whereas new vocalist Carlos Lopez perfectly replaces original singer Arturo Alvarez’ raspy, raw approach. The drumming is a bit unspectacular compared to the band’s ’97 opus which had a bad ass punch to offer which is pretty much absent now. Unfortunately, a rather sterile, thin and – I’m sorry to say so – cheap sounding production looms over “A Deadly Call From The Stars” like the shadows over Innsmouth negatively affecting an overall decent comeback record that should have pleased fans immediately. Honestly, this album here simply lacks the warmth and feeling I loved about “The Kinglike Celebration” and in 2011 it should be obligatory to not deliver a lame production, but well if you compare “World Painted Blood” with “Reign In Blood” you’ll realize that even the big names in Metal might fail in that aspect. This is a good, old fashioned mixture of Black, Death & Thrash ingredients with that invincible Cthulhu-bonus and a disappointing production, far from stellar but far from awful either. Give it a chance! www.luxinframundis.com