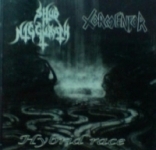 Although a split in essence, this is actually a compilation showing the transformation and evolution of a band. One thing I must criticize, being myself a follower of the band is that they should have started with the TORMENTOR part. Oh, well. Also the package leaves a lot to be desired, like an easy cash in, unlike some other compilations / tributes were the details are taken care in almost every aspect. Ok, now back to the music, I will start with the TORMENTOR songs. Included here are songs from their demo and some rehearsals / live songs for a total of 6 pieces. Two of them are SEPULTURA covers (from the "Morbid Visions" album) and that also indicates the style of the band, although I hear some SLAYER and early PESTILENCE influences (to me the live stuff heavily recalls the old POSSESSED live tapes, especially in the vocal department! – Frank). There were still some minor performance problems due to the youth and inexperience in the recording department, but it serves well as an historical look up for the band. Some of these songs were also released on vinyl a few years ago, for the die hard collector. Now, I will continue with SHUB NIGURATH, which is basically the evolution of TORMENTOR. They just changed vocalist and the transformation was important. Rather than just copying the aforementioned Death / Thrash bands, they opted for a more morbid style. I would say they now opted for a MORBID ANGEL style (although less technical, but probably as complex as the Floridians). Presented here are the songs from their debut studio demo (which has been also re-edited at least twice before this one). It has a competent if maybe a bit high treble sound. Another noticeable change in the band were the lyrics, as the new vocalist Arturo "Hongo" was heavily into H.P. Lovecraft and the occult. On this aspect, they were one of the few really Occult / Sumerian Death Metal bands in Mexico. I can also hear a bit of the old MASTER sound and bits of early VENOM and BATHORY. There is a quite weird cover song (at least for their main style) with TERRORIZER’s ‘After World Obliteration’. Members of this band went on to play in CENOTAPH and still active in THE CHASM (Julio the guitar player and basically main composer here) and Eduardo "Slayer" was last seen playing bass on a 7"EP for NECROCCULTUS, so they are still active somehow in music. Again, as an historical document, I can appreciate this one, but a bit more of dedication both in the presentation and mastering could have served better for this. More info you may find at: www.geocities.com/cenotaphrites/Shubniggurath.html, www.myspace.com/shubniggurath666