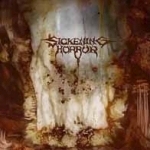 Other than the new DISAVOWED CD, I was looking forward to this Neurotic Records release the most. SICKENING HORROR is an ultra technical Death Metal band from Greece. Although this is SICKENING HORROR’s first release (other than a demo which is impossible to find… believe me, I tried) I’m sure I wasn’t the only one looking forward to this release, for this is the band of current NILE drummer George Kolias. I still remember seeing NILE when they opened for KING DIAMOND a few years back. I was a little worried because Tony Laureno was not with them anymore and I didn’t know who they got to replace him. So this new drummer comes out before NILE does their set and during his warm-ups lays down the fastest double bass I have ever heard in my entire life. After seeing this guy in action I decided to see just who the fuck this maniac was. Shortly thereafter I found out about SICKENING HORROR and I have been waiting for this album ever since. Since George is the permanent drummer for NILE now it took a while for this album to get recorded and then for whatever reason it took the band forever to choose a label to release it. Finally it has arrived. I should be up front and say that I was expecting (and admittedly hoping) for an all out blasting inferno of an album. Variety is nice but I was willing to make an exception here. What I got was a pretty varied, ultra technical Death Metal album with some progressive elements. The production is strong and clear and fits beautifully with the music. As expected George Kolias completely tears it up. Blinding double bass and quality fills are all over the place. But I was completely blown away by the bassist as well. His crazy bass lines reminded me of PAVOR and in fact this band popped up often in my head while I was listening to this album. Like most technical Death Metal it is not catchy at all but chances are if you are interested in this album then musicianship is probably a higher priority than catchiness. The only thing I didn’t really care for was one instrumental track that was nothing but a piano playing. I like originality but I didn’t think this fit well on the album. The tempo is predominantly fast but it does slow down enough so it’s not monotonous. There also are some random electronic noises and samples scattered through the album that when combined with the unorthodox song structures give the album a progressive feel. I can definitely recommend this to fans of technical and progressive Death Metal as well as drum and bass geeks. For info on the band and merchandise go here: www.neurotic-records.com