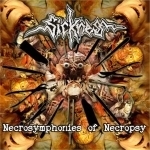 I consider myself a big fan of CARCASS, though I guess the guys in SICKNESS are bigger fans of the Brits, as they have laid their approach to music and expression quite close the legends. Albums as "Symphonies Of Sickness", "Necroticism – Descanting The Insalubrious" and "Tools Of The Trade" must have been in heavy rotation back in Johor, Malaysia where SICKNESS hails from. Give the band a listen, take a look at the artwork of this album and the logo, homage to the gods. Back around the turn of the last century there was a flood of Mexican band’s heavily inspired by CARCASS, and I actually found the raw grinding madness from over there quite interesting and fresh, after the band’s demise. Though now a decade plus later, and many CARCASS inspired bands later, I don’t really know what to think, until after numerous rotations to such releases, as they somehow gets to me after some time, I just can’t help it. Blasting SICKNESS is like listening to a CARCASS demo-session, with a small dash of REPULSION mixed into the blend, not as tight and well delivered as on the albums, a bit sloppy and more grinding in your face, not quite bad, nor anywhere near stellar, though a nice blow to the head and a nostalgic trip down memory lane, to a place that used to be, that can’t be replaced, only copied to something half as good as the original. Enjoy the swarming vulgar mass of infected virulency at www.facebook.com/sicknessgoredeath, www.grundar.com