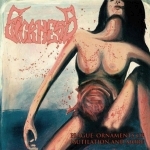 “Plague: Ornaments Of Mutilation And More” is a deluxe re-issue of the whole discography by the Floridian Death Metal band SICKNESS, a killer collection recently re-released on CD by the Dutch label Vic Records. It includes: the “Ornaments Of Mutilation” debut album from 1995, the Promo 1997, the “Torture Of Existence” demo from 1994 and some extra or re-recorded tracks from 1997. SICKNESS is a pretty obscure name in the US Death Metal underground, but is undoubtedly of interest because it was the band of two ex – members of MALEVOLENT CREATION: Kyle Symons, that was the singer of HATEPLOW too, and Gus Rios, who is currently involved in GRUESOME and CREATE A KILL. MALEVOLENT CREATION’s second phase vibe is actually very present in this CD that offers us almost an hour of sick and brutal American Death Metal. Imagine a mixture of early CANNIBAL CORPSE, early DYING FETUS and BROKEN HOPE, but with a rawest sound and production in the vein of underground bands such as EMBALMER, SPLATTERED CADAVER, PARALYSIS, TORTURE KRYPT etc. The riffing is in the typical US Death Metal style: nothing memorable, but sick. To me the strongest points are the drumming with tons of blastbeats, double bass etc. and the vocals (both growlings and screamings). The lyrics deal with: gore, violence, sex, necrophilia, serial killers and snuff, namely the classic themes of US American brutal Death Metal. In conclusion, this is a very good collection from a pretty unknown and underrated brutal Death Metal band from Florida. If your ears are into this kind of sound, get it and stay brutal! www.facebook.com/sicknessfloridadeathmetal, www.vicrecords.com