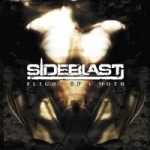 Four sick French musicians decided to create some twisted and sick form of extreme Metal. Take for example early EMPEROR and then add a bit of TERRORIZER, with some late PESTILENCE (“Spheres” era), some symphonic Black like DIMMU BORGIR and then some brutal Deathcore like in CRYPTOPSY. The final result might end sounding like SIDEBLAST. On this, their debut album, you will not find a single style to define them. Each song has a variety of styles in there, that to be honest, sometimes it is hard to follow it. Blessed with a heavy production (although probably a bit “synthetic” or maybe done intentionally) and some weird, really weird form of composing: add to that the use of many samples. On one hand, they have done something interesting and for the combination of styles, even a bit original. But on their own, and on each style, nothing we have not heard before. Their biggest triumph is also a bit part of their failure: way damn too much. It feels like they don’t decide what to play. I just feel they are a bit better on the Death Metal parts, which at the end are a bit predominant. Is it me or I can even hear a Tarzan-like scream in ‘Flight Of A Moth’, the song that gives name to the album? There’s even a cover for SEPULTURA’s ‘Arise’ but done in their style, and while keeping the essence of the original, it does sound at times like another song of theirs. More than a cover, I should say the right thing is to call it a version in SIDEBLAST’s style. After giving the whole thing many listens, the band uses and sometime abuses of many little details, specially samples, to make their music to sound a bit experimental and almost industrial. I suppose there might be people that will appreciate the way this band composes and the way they use different styles, but for most of the normal Metalheads, it will probably be too much. www.myspace.com/sideblast