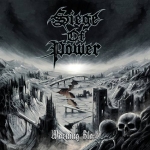 It seems there has been a new wave of supergroups popping up lately (MEMORIAM, HIDEOUS) and in that batch of new musical endeavors is the group SIEGE OF POWER. Featuring members of such fan favorites as ASPHYX, THANATOS, HAIL OF BULLETS and AUTOPSY this band combines an interesting set of individuals who have joined up to dish out an interesting form of Death Metal. Just based on history you can already tell what you would be expecting. The band just released their debut album “Warning Blast” on Metal Blade Records with a whopping 20 songs. My first thought was this would a band that will have a very strong unique Death Metal sound based on the band members’ history with their previous groups and in theory one would be inclined to think the same. Just by the band name and song titles you get that BOLT THROWER-esque vibe. Things get rolling with the track ‘Conquest For What?’, that starts off with a slow SOD like riff that both gives a bit of nostalgia, but also a glimpse of what you can expect. A good portion of the songs here are short (under two and a half minutes), which is both a good and bad thing depending on your outlook on the song. Track 4 ‘Born Into Hate’ is where the band really finds its sweet spot for sound. The song starts off fast, catchy, and then tempo changes but maintains its style. SIEGE OF POWER overall are a thrashy Death ripping band with talented musicians who have set out to reach new ground and at times you do get a feel / hint of Punk music (the track ‘Lost And Insane’). I was expecting something more in the vein of old school AUTOPSY / ASPHYX / HAIL OF BULLETS / BOLT THROWER and while this album is not a bad album it wasn’t great in my opinion (I had the same thoughts about the MEMORIAM albums) especially considering the group of individuals involved. I’m not knocking the album as I thought it was good but again not great. The music is catchy, the riffs are solid and there’s typical war / death lyrics. A few standout tracks are ‘Warning Blast’ with its slow sludgy doom feel, ‘Mushroom Cloud Altar’, ‘It Will Never Happen’ and ‘Born Into Hate’. Hats off for these guys to hit the ground running with 20 jams to start off on their debut, but I would not expect anything less from these battle-soaked veterans. More info at: www.facebook.com/siege-of-power-736348069884961, www.metalblade.com