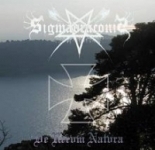 I had quite a hard time listening to this promo CD-R because it was burnt without care – too much speed, I suppose. Almost half of the songs are at least getting on my nerves because of strange click-noises that definitely don’t belong there and the last 2 tracks finally drove me crazy. Unfortunately, the music on this CD doesn’t really reward me for my torture. Badly produced “grim” Black Metal with a terrible “Bontempi” keyboard sound. So money seems to be a big problem for this band. Carelessness does additional harm: on my favorite track, ‘Ineffable Ode To A Heretical Convivium’, the guitar seems to be slightly out of tune. Or am I already insane? The drummer and the keyboard player seem to have timing problems every now and then throughout the whole album. For that, the production is still too “good”. Despite all these points of criticism and too much monotony (track 6!), SIGMA DRACONIS surprisingly manage to create quite some atmosphere! So, in case the band is locked in the rehearsal room for a while and gets some more budget, there might be something coming up somewhere in the future. www.sigma-draconis.com