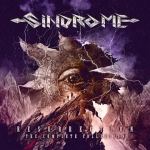 We all know it: sometimes life isn’t fair. And this goes for music in particular. There are so many bands that didn’t get the attention they should have. Sometimes great bands disband too soon. Sometimes great bands did not even get the chance to record a full album. The reasons for that are pretty diverse. In this special case, I can’t really understand the reasons why. SINDROME started out in 1986 in Highland Park in the Chicago area. Just one year later, their first demo “Into The Halls Of Extermination” saw the light of day. In those days, the Thrash wave was at its peak and a tape like that should have taken the Metal underground by storm. And soon enough, the world should have known the name SINDROME and moshed and banged and slammed to the Thrash hymns the Illinois five-piece created. But history took a different path. There is no SINDROME album that is listed among the best Thrash Metal albums ever, the band got buried by time and dust and just a few people like our editor and big chief remembered those guys. Until now! Just in time to the 30th anniversary of the band’s formation, Century Media released “Resurrection: The Complete Collection” with anything SINDROME released – and more. The first of the two discs features both demo tapes the band recorded, in chronological order. Thus this disc starts with some of the best twenty minutes in Thrash Metal history. Let’s put it simple: “Into The Halls Of Extermination” is timeless Thrash Metal in its finest form, five great songs with the opening title track and its riff barrage. And the irresistible ‘Rapture In Blood’ is even bigger. But the cream of the crop is the majestic ‘Cathedral Of Ice’, which is simply one of the greatest Thrash songs ever. But the other two songs, ‘Precognition’ and ‘Aortic Expulsion’ are either great, slightly complex Thrash tunes that need a mention in every Metal history book. As the first extra, this compilation features an unreleased song from the recording sessions for "Into The Halls Of Extermination". But I can’t really find out, why ‘Brought To The End’, a driving song with a slowed down middle part, was left off that demo, since it absolutely keeps the level of the tape. After that first demo it took SINDROME three years to release a new sign of life. Another demo tape called “Vault Of Inner Conscience” was unleashed in 1991, in times when Death Metal ruled the Metal scene. Maybe SINDROME where at the wrong place in the wrong time now, but this doesn’t influence the fact that this demo is another fine Thrash Metal gem. “Vault Of Inner Conscience” is a little more technical, slightly more modern in comparison to its predecessor. Yet especially songs like the opening ‘Descending Into Madness’ or the fantastic ‘Extra Sensory Warning (E.S.W.)’ should be obligatory for any serious Thrasher, young and old. That, of course, doesn’t mean that the other three songs ‘Astral Projection’, ‘Against Infinity’ and ‘Exit Screaming’ are not classy. So, the first disc is a formidable lesson in the history of Thrash Metal and leaves just one question unanswered: why the hell did SINDROME not make it? These 11 songs are absolutely obligatory for all those who didn’t hear them yet. As a bonus, this compilation features an extra CD with six live songs. These were recorded at The Iron Rail in Chicago on January 21, 1988. But to be honest: if you weren’t among those tape traders in the 1980s, you will not have any fun with these 40 minutes. Recorded with a walkman directly in the audience, the sound is nearly unbearable. So it is not a joy to listen to live versions of ‘Into The Halls Of Extermination’ with an extra intro or the up to now unreleased songs ‘Surround The Prisoner’ and ‘Psychic Warfare’. Those seem to be pretty cool, but I can’t finally tell you for sure. Anyway, the carefully remastered demo recordings alone are worth getting this double CD, and the booklet is a joy either, since it is filled with rare photos and an interview with singer Troy Dixler made by our former contributor Laurent Ramadier. So, you need to check out www.facebook.com/sindromechicago or www.sindrome.net, as soon as this site got updated. For the label, check: www.centurymedia.com