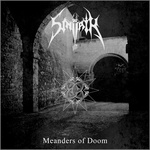 Since SINOATH is one of my fave Italian bands ever, I am going to start this review urging you to listen to any of their material. Specially the "Still In The Grey Dying" 1993 demo / EP, which is also one of my fave demo / EPs ever recorded. And then you can come back to this review. Now, if you are not an old fart like me, you’d probably haven’t heard about these Italian masters of Dark Metal. They wandered the underground in the early 90s with two demo tapes (1991 and 1993) and a debut album, "Research", released in 1995. They disbanded after that and came back in 2003. Four years later, their sophomore album "Under The Ashes" was released. The band went into hiatus only to come back once again in 2014. The "Meanders Of Doom" EP, which was released last year (2015), is their first original material since 2007. And these 2 songs + intro (and clocking at almost 20 minutes) prove that SINOATH have kept true to their sound. Their music is really hard to describe. It’s melancholic, dark, atmospheric, yet heavy, dense, doomy and intense. Imagine a mix between the early Greek Black Metal sound and some early MERCYFUL FATE. Add lots of atmosphere, memorable riffs and gruff vocals and you may have a good guide on what SINOATH is all about. These guys don’t need one of those overproduced sounds to get their music through. These 2 songs sound like they were recorded back in the mid 90s. Organic guitar tone, non-triggered drums, raw bass tone… I mean, everything is in there. Mixing-wise, all the elements are there. Keyboards are placed in the right spot between the guitars and the vocals, with clean guitar parts adding a lot of depth, a solid bass guitar and punchy, yet clear drums. I want to make clear that, although I am a biased here, SINOATH should appeal to any Metal fan! These guys have managed to create and identity and they have kept it (on and off) for 25 years. Let that sink for a minute or two. I just hope there will be a new SINOATH record in a not too distant future. Go ahead and give these guys some well deserved support here: www.facebook.com/sinoathofficial