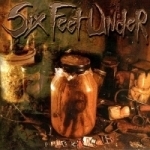 Can somebody please explain to me why the fuck these guys have become so incredibly successful throughout the last couple of years?! Is this simply another example of major magazine manipulation and extensive hype?! I don’t know… But I mean, c’mon – compared to what some of the members already delivered in their old bands DEATH / MASSACRE and CANNIBAL CORPSE this is nothing but pure bullshit! Chris Barnes’ unnatural deep vocal delivery may have fitted the brutal CANNIBAL CORPSE style, but it definitely sounds ridiculous in combination with the lame and uninspired songwriting of SIX FEET UNDER. This ain’t brutal and it ain’t heavy either. There’s lots of old school Death Metal bands around in the worldwide underground these days that are easily cabable of writing way better material – material of really dark, obscure, blasphemous and brutal nature, material which still maintains the right atmosphere and feeling. But unfortunately those bands haven’t been discovered by bigger companies yet and therefore don’t get the same attention. Well, at least they still know what this music is all about… a fact which SIX FEET UNDER obviously have forgotten. Remember, last year Barnes & Co already decided to release an embarassing cover album on which they proved how talentless you can interpret old Heavy Metal classics. And when they recorded their new album “True Carnage” they were obviously completely out of their minds as they even decided to team-up with a fuckin’ rap star (Ice-T) on ‘One Bullet Left’!! The result is one of the most horrible crossover songs I’ve ever heard since BULLDOZER released their almost similar stupid ‘Dance Got Sick’ EP. You should count how many ‘motherfuckers’ this BODY COUNT asshole did use in his lyrics. Fuck man, do you feel more tough by doing so, or what? This promo CD only features three songs (including the just mentioned one) and an additional video for the song ‘The Day The Dead Walked’ (which visually turned out really nice’n’bloody…), but it was already prove enough for me to avoid another full length release by this highly overrated “megastars”.