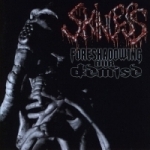 Finally this New York band gets a good record contract with a pretty good label, after many years on the indie circuit. Their last album “Progression Towards Evil” sold 11.000 copies for an independent release!! However they are back with 9 groovy, very Death Metal tracks. Most tracks have hilarious samples then the power crashes in. The style ranges from very slow brutal groove inducing riffs, to blast beated mania. If you want comparisons lets go with JUNGLE ROT, DYING FETUS meets BLACK SABBATH in the back alley and have a brawl and that’s what this sounds like. Beautiful brutality.