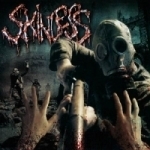 Sometimes there is really something to be learned from promo-sheets. The good people at Relapse, who usually seem to know what they’re talking about, proclaim in the “overview” that accompanies this promo, that SKINLESS are considered “on of the worldwide forerunners on the New York Death Metal sound, which is the most widely popular sub-set in the Death Metal Genre”. Well, obviously I missed out on something there since I couldn’t relate to any “New York Death Metal” besides SUFFOCATION and their endless list of clones. Anyway, if you tend to order your records alphabetically and sorted after genre, this would perfectly fill the gap between SIX FEET UNDER and the aforementioned SUFFOCATION. And more than suitably so since their brand of Death Metal can be best described as a mixture of the simple and groovy mid-tempo-sound of the first and the intense technical brutality of the latter. SKINLESS have a reputation as killer-live act which is easy imaginable since their songs are overall quite catchy. Yet the fantastic releases by MISERY INDEX and GADGET make this look a bit pale in comparison. Still a solid offering for all those who find SIX FEET UNDER too stupid and SUFFOCATION too complicated. www.4SKINLESS.com.