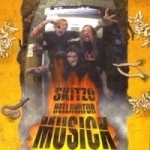 Hell, this is fucking sick!!! Just imagine 80s Heavy and Thrash Metal mixed with psycho Rock and a massive dose of primitive, controversial and disgusting humour (incl. vomit assaults on stage) and you will get an idea what is essential to those barbarians and their "sick-a-delic" sound. SKITZO have been busy smearing their puke over the Metal scene for more than two decades and unleashed 15(!) albums upon poor mankind. Their live shows have become legendary not only because of SKITZO’s cliché-ridden Metal attacks, but also through "blood, sweat and vomit", especially vomit. Even talkmaster Jerry Springer had to face the front-savage Lance Ozanix in one of his shows, where he spat his lunch on his girlfriend. Those appearances and a few other controversies have not only increased SKITZO’s publicity, but also made them a cult-band in the US, sadly their music can’t stand up to this. Although I expect SKITZO to be a killer act live (proved best by the live-bonustrack on "Hellavator Musick"), the six new Studio songs are not more than mediocre Metal songs with a lot of 80s riffs, melodies and feeling, spiced up by SKITZO’s own humour. Check them out if you like phrases like "fucked up on angel’s blood", think vomiting is extraordinary funny and love traditional Metal. Email: pukezone@hotmail.com, Website: www.go.to/skitzo.