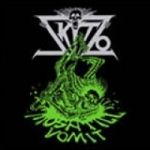 In this conquering tale of SKITZO, a band that has been around since 1980 / 81 and was previously under the name VENOM until they had heard about the VENOM from the U.K.! You have to admit, what ever you know or have heard about this Bay Area band really is quite exceptional in terms of the coincidental or in the bizarre. SKITZO has taken a rather strange but exciting trip from those early days til now and continues on their Metallic path blazing forth and puking on all those that stand in their way. So then do we have now this official compilation, made in China, from the virtually unknown company called Area Death, entitling this two disc collection "Mosh Till Vomit". An essential follow up to the band’s own self released demonography series called "M-80S" put out a number of years ago. Have no fear though your money won’t go to waste as of course added bonuses for the die hard who pick this up are more than here for you. "Mosh Till Vomit " takes the listener on a roll down memory lane starting with Disc 1 – the first twelve tracks concentrating on the band’s own financed LP from 1992 "Evilution"; a kind of Rock / Metal opus that has to be heard to fully experience. Tracks 13-16 take us back a year prior to 1991 to a more Thrash / Power Metal tempered EP called "The Skulling" a bit more heavier than GRIM REAPER yet on par with that band musically and where ONSLAUGHT was with "In Search Of Sanity " mixed with REVEREND’s "World Won’t Miss You" debut album – and not to mention with instances of truly exceptional guitar work – both in rhythm and lead areas. Disc 2, to me however is the real gem of this compilation, and have what I call the skull beneath the skin of SKITZO. This is where SKITZO are at their prime with straight forward, no holds barred Thrash Metal mayhem. Featured here are the original SKITZO 1984-1985 demos (tracks 1-3), the band’s 1986 rager "Wrathrage" (tracks 4-7), followed up by 1987’s "Mosh Till Mush" (tracks 8-11) also… For those that care, this was the very first demo tape I had ever heard from SKITZO back in the day! Cool, huh? Tracks 12-15 focus on the next installment in this demon catalog and that is with 1989’s "Derrangous" EP – more Metallic rollicking madness and closing out this second disc is the final nail in the coffin, so-to-speak, for this time period of SKITZO and this is with 1990s "Haunting Ballads" (tracks 16-17). All in all you really can’t go wrong with this compilation, as it has so much to offer for so many varied Metal tastes, if for some reason you don’t like Disc 1 try Disc 2, and vice versa. There’s a lot of shit currently on the market for sale and a lot of gimmicks to swindle your hard earned cash. This double disc has by far more bang for your Metal buck than most releases out now and even other attractive bonuses for those interested… The first 200 copies of this DoCD has with it a shirt, sticker, patch and pin! Try getting that from a major label! Contact: www.myspace.com/skitzo667 or adp.areadeath.net/