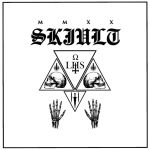 Since their inception in 2015, Cuban Black Metal band SKJULT have been busy. As of this writing, four albums have been released. Bands take note… Releasing albums on a consistent basis is a good thing. How do you think bands in the 80s and 90s got their name out there? They recorded an album, toured, recorded an album, toured, and so on. Conspirator plays all instruments and provides vocals, so maybe a tour is not always an option (as a band would need to be hired). However, at least there’s no lack of new music. The album, “Lucifer Hominum Salvator”, starts strong with ‘Lawless God’, a riveting track that brings forth classic Black Metal guitars and raspy vocals. ‘Under The Serpent’s Banner’ is another powerful, upbeat delivery. And I’ll admit, the fact it’s a one-man band isn’t obvious. The tempo on ‘The Sight’ slows down a little to a mid-paced, ever-changing track while ‘The Way Back To The Source’ and ‘The Fall’ provide instrumental tracks involving acoustic and atmospheric pieces. A somewhat plodding (in a good way) ‘A Star Down Below’ praises Lucifer as it sleeks and sneaks around in its mesmeric way. ‘Sacred Flames’ has a hint of Black / Thrash and brings the pace back up. The final track ‘Lucifer Hominum Salvator’ slows back down to a snail’s pace, but keeps the atmosphere thick and melancholic. I’ll have to say the album started off really strong but sort of lost its way a little as it progressed. Individually, each song is satisfying. However, keeping up the aggressive strength throughout the album would’ve made it more consistent and lifted it up to more memorable heights. Not to say it’s a bad album. It’s actually quite good. It simply could’ve used a little more ‘umph’ to it. For more info, check out www.facebook.com/skjultkuba, www.satanath.com