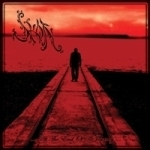 SKON
At The End Of A Journey
(Hexencave Productions)
28:47min

After a small atmospheric rendezvous with Twin Peaks, the Czech one man band SKON sets in with the doom-laden Metal that paints this debut release "At The End Of A Journey", a quite bleak and gloom title for a beginning. A beginning, that might could turn into something of a monster, within time, as the search for an identity on this release, is quite a test for this reviewer, once in a while, as many paths are trodden. The music on this release is as such decent, though the range in inspiration, quite clear inspiration from MY DYING BRIDE, newer KATATONIA, CANDLEMASS, SATURNUS and so forth, a quite harsh mix-up of heavy and dark Death / Doom to more gloomy and bleak melancholic Doom, and often in the same song, without clear transitions. I adore all the bands mentioned, though mostly by themselves, and not in a mix-up without an intention I can’t seem to grasp. SKON can turn into a great band in time, no doubt about that, though I miss some focus on the general composing of the music, and a more focused view on turning out dark and bleak atmospheres that hit my emotions, and not just a tour de force of what has made Doom a great genre. I am in a quite dark period of my life as we speak, and I haven’t had the music and atmosphere on this release twisting me around in further agony, as I can’t feel the fire and atmosphere on here, I miss some intensity and pure despair, some real emotion and darkness, not just some music. Check the band out at: www.bandzone.cz/skon, www.hexencave.wz.cz