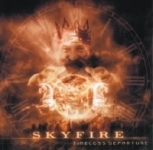 SKYFIRE is a pretty new Swedish band which luckily doesn’t walk the path of this typical, aggressive Swedish Death / Thrash Metal which so many of their colleagues walk these days. After a pretty bombastic intro, the real opener ‘Fragments Of Time’ already gives a pretty good idea where to place SKYFIRE. If you could imagine a mix of the fast and catchy elements of a band like CHILDREN OF BODOM and the melodic (especially the keyboards) and sing-a-long character of a band like THYRFING, you’re getting pretty close. The production is very good (Abyss Studio, what else did you expect?), the booklet looks nice and the songs themselves also manage to convince. I do think though that SKYFIRE needs to watch out when they’re in the middle of a mid-tempo track and suddenly speed things up from 0 to 100 miles/hour in less than 3 seconds: the keyboarder and the bass-player sometimes have difficulties to follow there in my opinion, and are a bit behind the other musicians which has a bit of a chaotic sounding effect sometimes. Nevertheless a very nice debut.