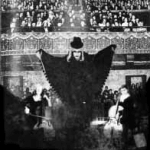 I was anxiously waiting for this release, as Black Hate Productions has done an incredible work with GRÄFENSTEIN and the great MAKE A CHANGE… KILL YOURSELF. In fact, this release is more related to that last band, meaning it is more orientated towards the suicidal side of Black Metal. Few things I know about this Norwegian band, but that this is their second release so far. They claim to be influenced by the first wave of Norwegian Black Metal, referring to bands like DARKTHRONE, BURZUM and MAYHEM. Well, they also add some kind of theatrical atmosphere to the whole to create their sound. On here you will find 5 long songs, which they all seem to have an intro for each one, even if it is a part of the song. The thing is that after giving this one repeated listening, it tends to be more in the early BURZUM vein than anything else, if a bit psychedelic at times (something I suppose was not done intentional, but to me it sounded like that) with definitely way better vocals and production values. I suppose that they do sound primitive and old school, but they are wise enough to use and mix their music in such a way, that although it is nothing original, it does sound fresh. When it goes into traditional Black Metal stage, it does sound cold and grim, mostly mid-paced. One thing is for sure, they have recorded everything to have an effect on the listener, more akin to an horror movie than anything else… and they succeed. This is not for everyone, I am afraid, but those into cold obscure, almost orchestral Black depressive Metal, will find it interesting. www.slagmaur.com, www.blackhate.de