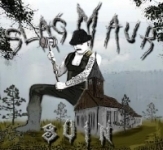 The mysterious SLAGMAUR from Norway have recorded a trilogy called “The Three Protocols Of Forsen”, and “Svin” is a part of this trilogy (the two other parts are “Skrekk” and “Domfeldt”). Originally recorded as a demo and now published via Black Hate. Since I do not know the other two parts of that trilogy I have no clue if this release is embedded within a certain concept, maybe like the first three ULVER releases. Furthermore I have no idea what this band is all about. The first copies of this album are going to contain a “special church-burning matchbox” – provocation for business sake or real ideology? Just a joke? And how to judge the promo-sheet information the bandleader General Gribbsphiiser has been in jail? No further information is given, like generally the band is very sparingly providing any information, seems like they are playing hide and seek with the public. Anyone who is interested may start a deeper examination of the phenomenon SLAGMAUR and its leader General Gribbsphisser, but for this time I will concentrate on the music. Black Metal, slow played, almost near the edge of Doom Metal, desperate, distorted shouting, long instrumental parts underlined with spoken, sampled words – all in all far beyond the traditional Black Metal. The only reference I have in mind is the SUN OF THE SLEEPLESS / NACHTMAHR split-album. Despite avoiding the traditional Black Metal elements, “Svin” is arousing the same atmosphere – darkness, desperation, hate, solitude. SLAGMAUR manage to keep the ancient Black Metal spirit alive, without repeating its musical elements. Quite surprising, for me. So all listeners out there who are wondering if there is a possibility that Black Metal can musically develop without betraying its roots, may, besides listen to the newer SATYRICON outputs, take a closer look on SLAGMAUR. www.slagmaur.com