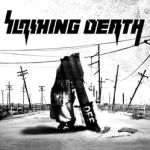 Back then, in the fanzine and tape-trading days, it was not unusual to see something related to this band, as it featured VADER members in its line-up. They started as a noisy and brutal Death Metal band, very much into old KREATOR, SLAYER and also of the very angry type of Hardcore in the vein of CRO-MAGS, AGNOSTIC FRONT and early D.R.I.. In their debut demo, a decent sounding rehearsal, you can hear this. Their first studio effort, their 1989 demo, for some reason has a more Death Metal sound, something that although not bad, at times it seems it was not exactly the style for the band, as their Hardcore influences were still there but they got lost in the brutal sound. Their third demo, the one with the best sound, is maybe the ultimate form for SLASHING DEATH, this shows all of their influences there, sounding like "Harmony Corruption" era NAPALM DEATH, but with more emphasis on the Hardcore influences, and that fits just right to the band. Even here, the vocals change between more melodic Hardcore style and the grunts. If the term "Deathcore" was used correctly, SLASHING DEATH will fit there, just pretty much like those forgotten Germans of DEATHCORE (the band). Strangely enough this compilation starts with the 1990 demo and ends in the 1988 songs. And I think that this compilation has been done in a similar way a few more times, yet for collectors this is more than worthy. The band seems to be going on with one original member, hopefully sooner or later they will come with a proper full length. www.facebook.com/slashingdeathdealer, www.selfmadegod.com