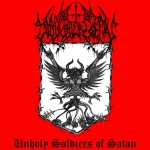 The Swedish duo SLAUGHTERCOFFIN is definitely not your typical Swedish Death Metal band next door. And that’s damn fine, for starters. Their approach to Death Metal is far more black than most other like-minded bands from their country. You won’t find any Sunlight production here, not even the typical sound of the ultimate pedal of Death. Instead, the two guys added so much Black Metal to their sound that SLAUGHTERCOFFIN can hardly be called Death Metal by all you purists. Any illusion of that is already gone when the first seconds of the opening tune ‘Pope Penetrator’ (!!!) pave the way for the eight songs of the album. Yes, that sounds like SLAUGHTER, of course the Canadian masters of the massacre. Thus it might not be an accident that Lord Slaughter and God Emperor Coffin chose this name for their band. Yet this is just a kind of overture for an utter dark Death Metal feast. And it’s a real ride towards hell, full of fast attacks, clever breaks and garnished with a variable vocal delivery. Yet SLAUGHTERCOFFIN sound best when they slow down the speed, no matter if it’s just for a break (‘The End Of Seraphim’) or even for a whole song like the fantastic ‘Den Lede (The Rise Of The Kungsorian Horde)’. And with the tardily grinding juggernaut ‘A Furore Mannorum Libra Nos, Domine’ the Swedes are definitely out to gently break all necks. What a musical maelstrom! And it would be a fine last song to a great record, but SLAUGHTERCOFFIN chose a covertune that really impressed me – which is not easy! But this Death Metal version of the BATHORY classic ‘Equimanthorn’ really kicks serious ass, slaughtered and encoffined like this! Let me get this straight: “Unholy Soldiers Of Satan” features really great Death Metal with dirt under the fingernails and the spirit of the days of yore. Taking into consideration that it is a compilation of songs from two older demo recording session, I can hardly wait to hear more of SLAUGHTERCOFFIN! Find out more at www.facebook.com/slaughtercoffin or www.facebook.com/ibdc666