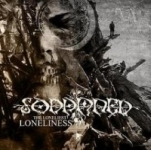 From Santa Catarina, Brazil, comes a blackened Death / Thrash Metal band called SODAMNED whose 10-song debut studio album, titled "The Loneliest Loneliness", was released last September on Face The Abyss Records. Even if SODAMNED have just released one full-length studio album thus far, the band has already done for instance a full European tour in the fall of 2011 – playing 16 shows in 6 different countries. That makes you a bit curious about the band’s potential on their debut record, doesn’t it? Well, there’s definitely a good load of potential in this 4-piece Brazilian act, no doubts. The guys’ hybrid of Death Metal, Thrash Metal and even some Black Metal, has obviously been cooked carefully during their countless rehearsal sessions – and all those sweaty and intense sessions have truly paid off for them on their debut studio album. In fact, in a way SODAMNED lightly brings such Swedish Black / Death Metal names to my mind as SACRILEGE, early DISSECTION and NAGLFAR – at times really pushing the pedal to the Metal, whilst also never forgetting the importance of striking melodies in their song structures, which certainly gives this band more free space to move within their stuff they churn out on "The Loneliest Loneliness". Both grunt-y Death Metal growls as well as more Black Metal type of shrieks match together pretty well as a part of the band’s frenzied and intense sound but the kind of Peter Steele vocal plagiarism, which is present in a song called ‘Painted In Blue’, simply doesn’t work for them at all. Still, as wholeness "The Loneliest Loneliness" is a decent blackened Death / Thrash Metal release, without paling too much in comparisons to some other albums around with a similar catchy ink that the album undoubtedly has. Now, having said that, you may want to head your way next to: www.myspace.com/sodamned, www.myspace.com/facetheabyssrecords