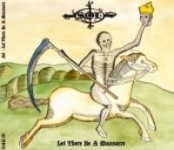 SOL
Let There Be A Massacre
(Ván Records)
57:35min

Well, never chanced to hear of SOL before this album, so I cannot tell you if there has been any release prior to this album. Emil Brahe, the man behind this one man project SOL, plays an extreme kind of blackened / deathlike Doom Metal, he is eager to create a very own black as well as dead atmosphere which is a bit hard to describe. It fits a hard walk through endless ice-fields on which your thoughts tend to cross the border to insane regions as well as just standing somewhere between the tombs of the ancient pharaohs in the sandy deserts which are about to fill your throat completely. A really “dry” album which has its own charme but is in no way easy to cope with, but I guess it was not meant to be. Death will come anyway… Give this at least a try… www.van-gbr.de